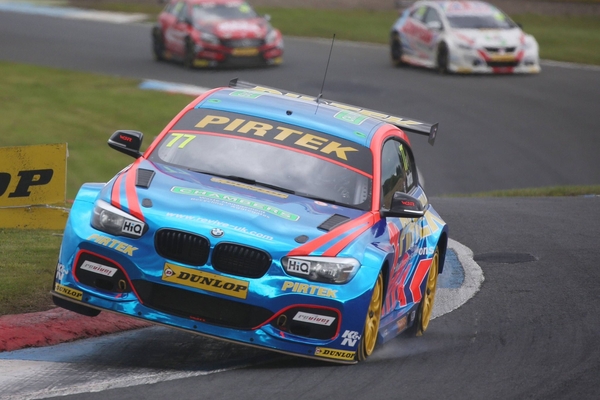 Despite a strong performance Chambers-sponsored driver Andrew Jordan was disappointed with the final result at the Dunlop MSA British Touring Car Championship at Knockhill in Scotland this weekend.

Andrew managed to climb from 30th to 13th during an action-packed third race of the day, and produced the second-fastest lap in his WSR-run BMW 125i M Sport and maintaining his seventh place in the Drivers’ Championship.

Unfortunately Andrew’s weekend was destroyed when he was blocked on his one flying lap on slick tyres at the end of a drying qualifying session, he started the opening race from 17th place and finished 13th.

A superb start brought him inside the top-10 on the run to the first corner of Race Two, but the 2013 Champion was unfortunately involved in a multi-car incident that brought out the red flags and damaged his car too much for him to take the restart.

Starting from the back row of the day’s final race, Andrew produced what he described as his ‘best drive of the year’ to climb back into the points on the narrowest circuit the BTCC visits.

Andrew Jordan said: “Performance-wise, today was strong, especially in Race Three as I passed 17 cars on a track where overtaking is very tough. I think the top-10 was achievable had it not been for the safety car coming out twice. After our misfortune in qualifying, the strategy was to finish Race One solidly inside the points, get into the top 10 in Race Two and hopefully have some luck with the reversed-grid draw for Race Three. Unfortunately, the first-corner incident in Race Two put an end to that plan. I hit Matt Neal when he braked earlier than I was expecting for the first corner and then was hit at the next turn, which put me out. It wasn’t intentional, but I was the instigator and I have to take that on the chin. We’ll bounce back stronger at Rockingham.”

Dick Bennetts, Team Principal, said: “It’s such a shame that AJ was blocked in qualifying at the critical point, because otherwise he could quite easily have been on the podium a couple of times today. BMW Pirtek Racing worked incredibly hard to get his car repaired after the incident in Race Two so that he could make the final race; and he rewarded them with a tenacious and clean drive through the field. He’s carried a lot of bad luck this year, but I hope the cards can start falling more in his favour over the next few events.”