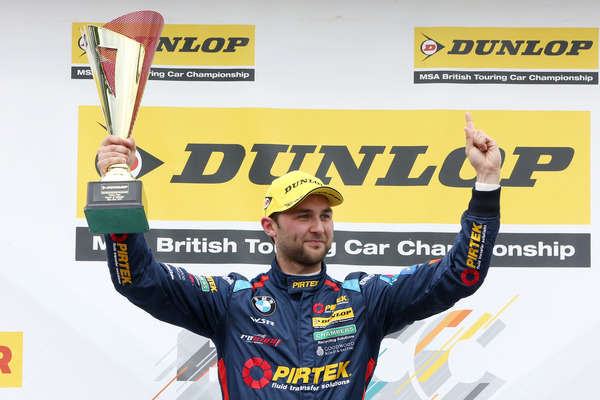 What a week it’s been for Andrew Jordan!! If the birth of his baby daughter on Wednesday wasn’t reason enough to celebrate, he then went on to gain his second victory of the season in Round 4 of the Dunlop MSA British Touring Car Championships at Oulton Park on Sunday.

This latest win has elevated him five places to seventh in the Drivers’ Championship and put him back in with a chance of winning a second series title.

From a season’s-best second on the grid, Andrew leapt to the head of the field at the start of Race One. He led every lap in his West Surrey Racing BMW 125i M Sport to record the 18th BTCC victory of his career.

In Race Two, Andrew came home fifth and was then drawn on the front-row for the reversed-grid third race and looked set for a second win of the day before a late-race safety car eliminated his hard-earned advantage.

Falling to third at the re-start, he mounted a strong defence of his podium position and held it to the chequered flag; a result that helped BMW Pirtek Racing climb to seventh in the Teams’ Championship and kept BMW on top of the Manufacturers’ points race.

We’re very much looking forward to seeing Andrew in action again in Round 5 which takes places at Croft in North Yorkshire on 10th-11th June.

Commenting on the win Andrew Jordan said: “It’s been an excellent day to round off a fantastic week that started with the birth of my daughter, Sydney, on Wednesday, continued with a front-row grid spot and has culminated with my second win of the year and another podium. I’ve felt a lot more comfortable with the BMW this weekend, which was always going to happen as I continue to learn rear-wheel-drive touring cars. Without the safety car in Race Three, I think I might have been able to hold on for another win, but I can’t be disappointed with my results. The championship campaign starts here.”

Dick Bennetts, Team Principal, commented: “Andrew’s had a very good weekend; bouncing back brilliantly from two low-scoring events. A win, a podium and another strong points finish is exactly how a champion drives and he’s made his qualifying performance count today. He’s risen from 12th to seventh in the Drivers’ Championship and is more than capable of continuing his climb when we go to Croft in a couple of weeks.”