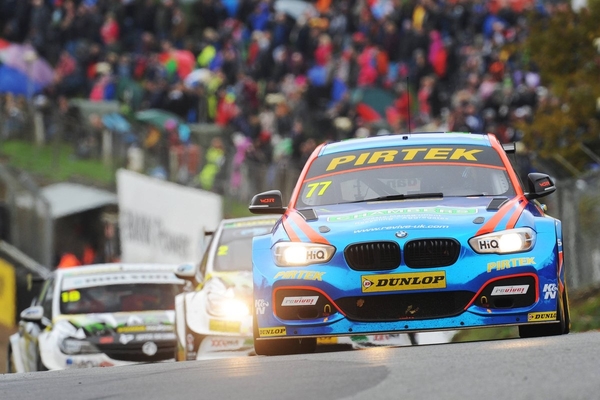 Share Tweet Share Email
Andrew Jordan’s efforts at Brands Hatch helped BMW to secure the Dunlop MSA British Touring Car Manufacturers’ Championship on Sunday.
The Chambers-sponsored driver scored crucial championship points on a dramatic day of racing at the Kent circuit to help the German manufacturer claim the title.
Starting a damp Race One on wet-weather tyres, Andrew made huge gains from his 18th place on the grid. But as the circuit dried and the slick-shod cars took over at the front, his WSR-run BMW 125i M Sport began to slip back.  A crucial couple of overtaking moves late in the race proved vital in the destiny of the Manufacturers’ title.
Making superb progress through the field in Races Two and Three, Andrew secured 17th and 13th-placed finishes to round out the season.
Andrew’s three race wins in 2017, in what was his first campaign in a rear-wheel-drive touring car, netted him ninth place in the Drivers’ Championship.
Andrew Jordan said: “I’m proud to have helped BMW secure the Manufacturers’ title in my first year in a rear-wheel-drive touring car. Today was tough with the way the conditions were; In Race One, in particular, we could have looked like heroes if the rain had continued, but it wasn’t to be. We’ve had some fantastic highs during the year with three wins and I can definitely feel that my speed and consistency with the car has improved as the season’s gone on, so that’s the big positive I’ll take into the winter.”
Dick Bennetts, Team Principal, said: “The primary target for BMW Pirtek Racing this weekend was to help BMW win the Manufacturers’ Championship and it’s fantastic to have done this. We went with wet tyres in Race One in order to cover off our rivals for the title. AJ still scored crucial points with a last-lap overtaking move on our big rivals for the Manufacturers’ title and that was invaluable. AJ’s been a fantastic addition to the team and three wins are an indication of his talent.”