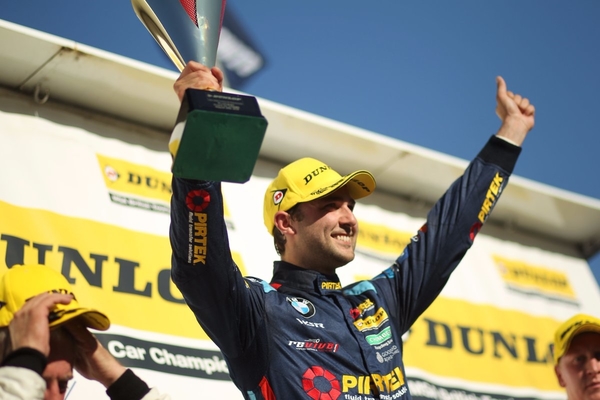 Drawn on pole position for the reversed-grid final race, Andrew never put a wheel out of line in his WSR-run BMW 125i M Sport to take the 19th win of his BTCC career and climb to sixth place in the Drivers’ Championship.

Andrew had finished 12th and seventh in the day’s first two races after qualifying 18th; the Chambers-sponsored 2013 BTCC champion made constant progress on the 1.9-mile Rockingham course.

The BTCC continues at Silverstone, the home of British motorsport, on September 16-17.

Andrew Jordan said: “It feels fantastic to be on the top step of the podium again and I have to say a huge thank you to the WSR team for helping to put me there. We just missed the sweet spot in qualifying, which put me 18th on the grid – although only half a second off pole – and I knew today would be a case of making up whatever places I could and then hoping to be in the mix for Race Three. That’s exactly what happened and I’m just so pleased. After the past few rounds, where the results haven’t reflected our true pace, this is a terrific feeling.”

Dick Bennetts, Team Principal, said: “It’s very good to end the day with a victory, the third for BMW Pirtek Racing this year. After qualifying 18th, the plan for AJ was to play the waiting game and strike in Race Three, and you’d have to say he executed this to perfection. I’m delighted for him because he’s had so much bad luck this year and this goes some way to putting that right. Looking at the straightline speeds, it’s clear we didn’t have the fastest car this weekend, but sometimes you just have to take your opportunities when they come along and that’s what’s happened today.”