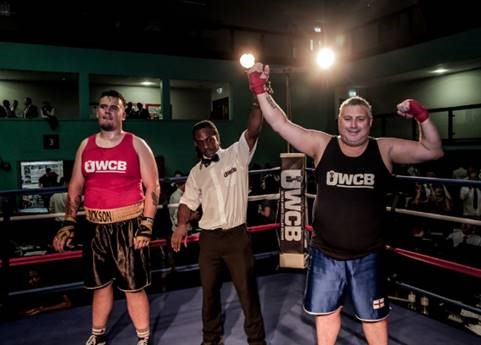 Anthony Joshua stunned at Wembley Stadium last month with his devastating knock out in the seventh round to defeat Russian Alexander Povetkin, defending his IBF, WBA, WBO and IBO crowns.

And here at Chambers we are proud to have another impressive British boxer in our midst. Despite never boxing before, Darren ‘The Mouse’ Manning won his maiden match within just 1 min 10 seconds with a technical knock-out.

Darren, who is a Chambers client, was taking part in an Ultra White Collar Boxing (UWCB) challenge at Westcroft Leisure Centre in Carshalton. The UWCB initiative gives people with no boxing background the chance to train for eight weeks with professionals and compete in a match while raising money for Cancer Research.

Darren, who was in the blue corner, won his match in the first round and raised nearly £10,000. We were one of his sponsors, and our logo was on the back of his vest.

Darren said: “There was 35 fights during the event and mine was at 11pm. There was more than a thousand people watching including my friends and family and the atmosphere was amazing.  My entrance music was Barbie Girl which my colleagues chose.

“Despite my opponent being younger and taller than me I won in very quick time and the buzz was incredible. I struggled to sleep that night because of the excitement.”

Darren is continuing to raise money for Cancer Research, and also has taken part in Rough Runner in aid of Down’s Syndrome Association (when he managed to crack two ribs and fracture his chest bone!) Anyone wishing to donate can do via the following link uk.virginmoneygiving.com/team/manningsmentalist. His next fundraising venture is a Christmas toy appeal, with all donated toys given out to children’s hospital wards and hospices across south London). For more details please contact Darren at darren.manning@bellway.co.uk