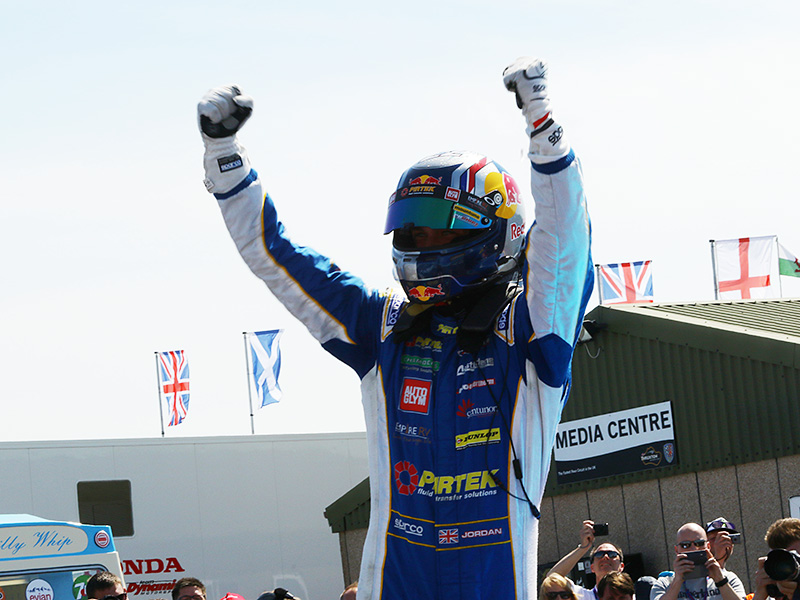 As a sponsor of champion racing driver Andrew Jordan, we have had an exciting few weeks watching his dramatic progress in the rounds of the 2016 British Touring Car Championship (BTCC) .

Racing a Ford Focus ST – complete with the Chambers logo on the bonnet – Andrew sped to victory in the opening race in front of huge crowds at the Thruxton circuit on May 7 – his first BTCC win in just under two years.
Since then, Andrew – who drives with the Motorbase Performance team – has continued to deliver strong results. At the Oulton Park meeting on June 4 – 5 he claimed three thrilling top ten finishes – putting him in sixth overall position, while also securing lead position in the Independents’ championship.

On June 18 and 19 at Croft, the Darlington based track, despite his team having to change both his car’s engine and gearbox, he managed a heroic fifth place in two races.

Andrew is now looking ahead to the next 2016 BTCC races that will take place at the Snetterton, Knockhill, Rockingham and Silverstone circuits before the overall winner is crowned at the final event at Brands Hatch on October 1 -2, so watch this space for updates on Andrew’s progress and hopeful victory!

Andrew says: “I am really happy with how the first half of the season has gone. To settle in to a new team so quickly and now be sitting 4th overall in the Championship and leading the Independent Championship is Fantastic and gives us great momentum going into the
second half of the season. The Championship will be won by consistency so we need to a make sure we finish all the races and score wins and podiums when the opportunity is there.”

Chambers has been a keen supporter and advocate for British motorsport for many years. Our founder Pete Chambers used to drive Porsche cars at prestigious races including Daytona 24 hours and the British GT Championship. So we are very pleased to support Andrew – who made history in 2009 by becoming the youngest ever driver to score a BTCC pole position.

As the UK’s biggest motor racing championship, the BTCC races are attended by huge crowds and take place in an electric atmosphere. We are very proud of Andrew’s achievements and delighted to see the Chambers’ logo on the winners’ podium and race track – make sure you follow ITV4’s coverage of the event!