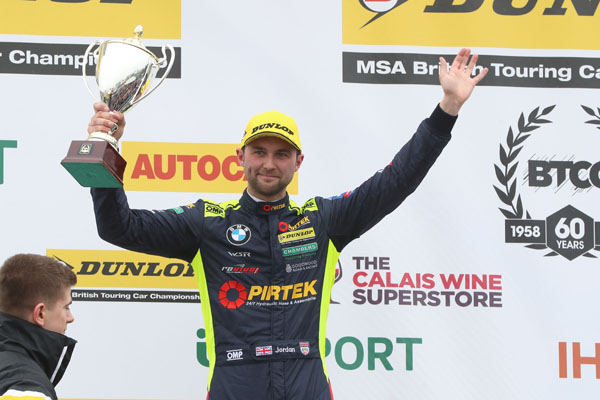 It’s that time of year again when we are glued to our seats watching the British Touring Car Championship (BTCC)!

Chambers is a proud sponsor of  2013 BTCC champion Andrew Jordan – and we are always thrilled to see our logo on his bonnet and roof as he speeds around the event’s 10 English and Scottish circuits in front of sell-out crowds.

Andrew enjoyed a podium start at the dramatic opening weekend on April 7 – 8 at Brands Hatch. Driving for Pirtek Racing in a BMW 125i M Sport. Andrew took third place on the slippery track in race 1, and ended the weekend in 13th position overall.

The second round at Donington Park saw Andrew start the opening race in 30th place due to a mechanical issue with his car. He finished the race in 21st place before taking 18th in race two. In race 3, after avoiding an accident ahead at the start, Andrew quickly worked his way up into the top ten and crossed the line in an impressive fifth spot – salvaging vital championship points that could prove key come the end of the season.

During the third round at Thruxton at the weekend, Andrew managed to bring home a pair of top six finishes, despite suffering from food poisoning. The illness meant  he took the difficult decision to withdraw from race three, but the points achieved earlier in the day meant that he has now moved up to eleventh position  in the championship standings ahead of the next rounds at Oulton Park and Croft.

Watch this space as we follow Andrews’ bid for a second BTCC title!