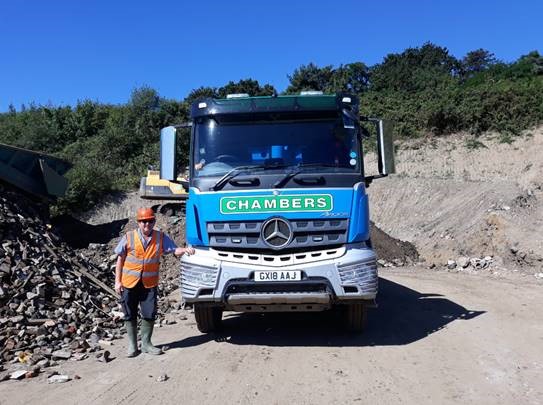 One of our longest serving members of staff, Quarry General Manager Graham Strong, is celebrating 34 years with us this year. When he joined Chambers in 1984, Margaret Thatcher had been re-elected Prime Minister, Liverpool had won the European Cup for the fourth time while Bob Geldof and Band Aid’s single, Do They Know It’s Christmas, became the biggest-selling single of all time!

As a qualified HGV and plant driver, Graham spent the 1980s delivering skips and spreading sludge as well as transporting aggregates at our Homefield Sand Pit in Farnham. He recalls that the state-of-the-art vehicles in our fleet – which included a Mercedes skip lorry and a Scammel tipper – were much heavier and slower to operate than the modern Mercedes and Daf models we use today. Whereas Graham had to fill in paperwork by hand for all transactions back then, our drivers today use handheld devices while technology such as electronic tachographs and vehicle trackers ensure our fleet of vehicles is always at the right place, at the right time.

Since the 1980s Graham has deservedly moved up the ranks – from running the vehicle workshop at our Jacobs Wells site to being Quarry General Manager at Runfold and overseeing the maintenance and repair of the Chambers Group heavy plant and machinery. When he joined, around 30 people worked for Chambers and now there are over 130 of us. We would like to publicly post our grateful thanks to Graham for the valuable (and very Strong!) contribution he has made to the business.