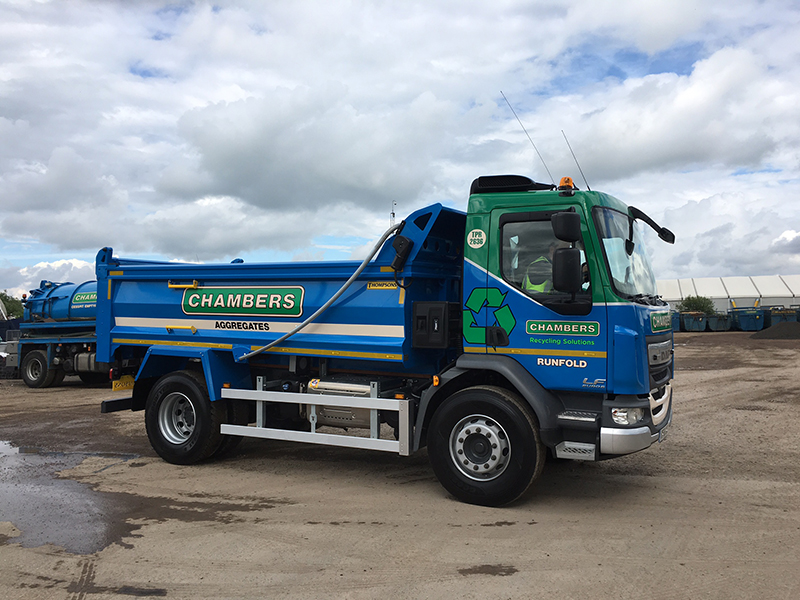 New addition to our fleet of vehicles, DAF tipper for aggregates

We have welcomed another new addition to our 80-strong fleet of vehicles. Sporting the eye-catching Chambers branding, the brand new DAF LF 55 tipper truck is stationed at our Runfold centre – which specialises in recycling and selling aggregates including sand, soil and stone. The new truck has the important job of collecting and distributing aggregates on site as well as delivering to our customers near and far.

Supplied by Barnes DAF of Guildford, the striking vehicle has an impressive specification to match its looks. Powered by a PX7 6.7ltr engine producing 280bhp, it has a gross load limit of 18 tonnes and boasts an aluminium tipping body and in-cab tail release and tipping control. Achieving an average of 8.20 mpg, it is far more fuel efficient than its predecessor wh ich managed 6.31 mpg.

Our Runfold centre, based on Guildford Road, prides itself on providing high quality, locally quarried and recycled aggregates quickly and cheaply. It houses a £1.8 million soil washing and recycling plant – one of only a handful in the country- which enables us to annually recycle over 100,000 tonnes of inert waste – including broken bricks and concrete, soil and stones – which might otherwise have ended up in landfill. These products are all produced in accordance with the Environment Agency Quality Protocols.