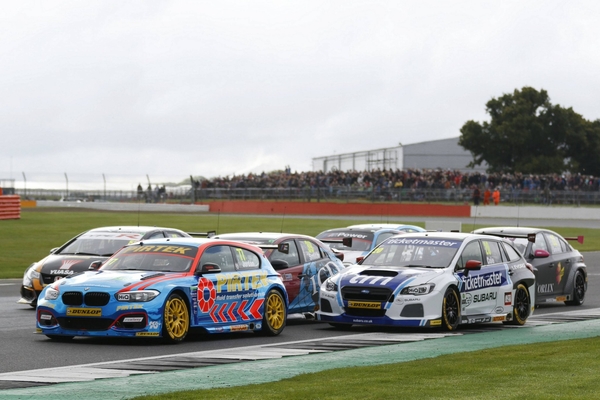 Share Tweet Share Email
Chambers-sponsored driver Andrew Jordan put on an overtaking masterclass this weekend at the latest round of the Dunlop MSA British Touring Car Championship at Silverstone.
Andrew passed 18 cars in a stunning recovery drive in the final race of the day to climb from 26th on the grid to eighth by the chequered flag.  His outstanding drive in his WSR-run BMW 125i M Sport wiped some of the disappointment of the day’s earlier races away.
Both of Andrew’s earlier races had ended in disappointment. He was an innocent bystander in a Race One incident that put him out with front-end damage.  Sterling work from the WSR team repaired his BMW for Race Two, but further contact resulted in a puncture, from which he could only recover to 27th place.
Andrew’s results put him eighth in the Drivers’ Championship with just the Brands Hatch triple-header in a fortnight’s time remaining.
Andrew Jordan said: “I was pleased with my performance in Race Three to come from 26th on the grid and finish in the top 10, but I know we could have had more. I don’t know what caused the Race Two puncture, but it put us on the back foot, and in Race One I had nowhere to go when a big accident happened in front of me. The driving standards have been pretty poor this weekend. Normally you can plot your overtaking moves as you go along, but today it’s just been pot luck in terms of avoiding people running into each other. I think we all need to calm down ahead of Brands Hatch.”
Dick Bennetts, Team Principal, said: “Andrew drove very well in Race Three to overtake so many cars and finish eighth. The pace he showed in that race was an indication of the speed he had in race trim from the BMW today. It’s a big shame that he’s been denied the chance of a few more strong results through factors outside his control. The driving standards have been poor today and he’s been a victim of that.”