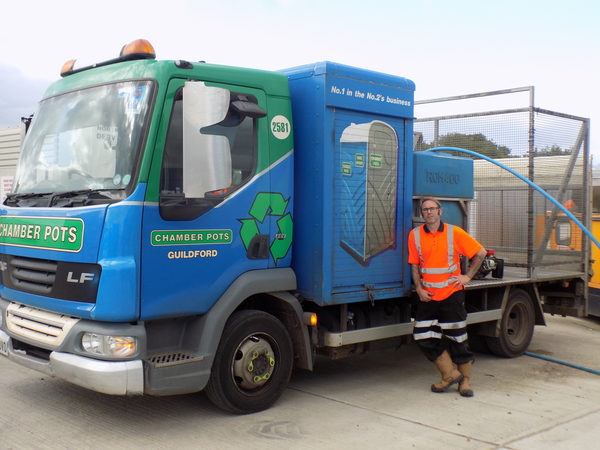 So the next guys in our series of unsung heroes are Les Mainwaring & Allan Lambert who might arguably have the ‘crappiest’ jobs in the whole company! These guys drive our portable toilets and cesspits lorries – it’s a messy job but someone has to do it and so they definitely deserve some recognition as Chambers Unsung Heroes.

Les has been working for Chambers for over 30 years and his most recent job is driving the septic tank and cesspit emptying tanker lorry. As do most of our drivers, Les has an early start and is usually in the yard by 5.30am every day in order to undertake his lorry checks before heading out on customer visits.
Each customer involves laying out and connecting all the pipes to the lorry depending on how close he is able to get to the tank. It’s not uncommon for him to have to connect over 25 pipes together, and sometimes up to 50.

Once the customer’s tank has been emptied he takes the contents to the nearest Thames Water site to be emptied. The amount tipped off the lorry is registered and reported back to the office so that the customer can be charged accordingly.

Les enjoys his job as he’s left alone to just get on with it and likes getting to know all of his regular customers and their own individual requirements, sometimes they even phone the office to ask him for advice on their tanks.

Many years ago when Les had a brand new lorry, the switch to open the tank at the back of the lorry was accidentally left open and so when Les went to open the doors (after travelling up hill) the contents of the lorry landed on him when he opened the back doors. To make matters worse it happened opposite a vicarage and when he was in the nearby stream in just his pants getting cleaned up the vicar come over to complain – that’s what you call a bad day at the office.

When Les isn’t driving lorries he like making models of them. Infact if you ever pop into the office here at Chambers you’ll see one of his creations on display, a fully functioning mini skip lorry.

Allan is another long standing member of the Chambers team and has worked here for 14 years. He has the very un-glamorous job of delivering and collecting all of the portable toilets, Chamber Pots.

Again Allan’s day starts around 5.30am when he completes his walk around checks on his vehicle and checks his PDA for details of his jobs for the day.

Allan will usually empty and service around 30-40 portable toilets every day from customers using them for a variety of reasons… building site toilet facilities, bathroom refurbishments, parties, weddings and this year they have been very popular for school prom after parties.

The lorry can carry up to 2 toilets and has an onboard jet washing facility, so after every collection Allan gives them a through clean on the lorry and restocks them with fresh hand sanitiser and toilet rolls, ready to be delivered to the next customer.

At the end of each day Allan brings the lorry back to the yard in Guildford where he fills the jet washing tank full of fresh water ready for the next day.

It might not be most people’s dream job but Allan enjoying being out and about working on his own initiative, even though he’s had the odd few incidents when the jet wash has blown in the wrong direction and he’s had to return to the yard semi-naked. He also finds it funny discovering some of the weird and wonderful things people leave behind in the toilets.

In his spare time Allan loves fishing and his most impressive catch to date is a 41 lb Common which he caught in France.